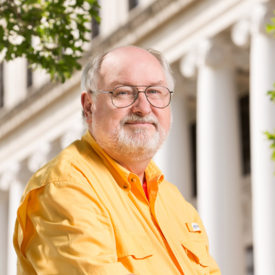 D. Kirk Hamilton, PhD, FAIA, FACHA, EDAC
Julie & Craig Beale Endowed Professor of Health Facility Design
College of Architecture, Texas A&M University
Kirk is the Julie & Craig Beale Endowed Professor of Health Facility Design at Texas A&M University where he has taught healthcare design at the graduate level since 2004. His academic research is about the relationship of evidence-based health facility design to measurable organizational performance. His five-year professional Bachelor of Architecture is from the University of Texas in Austin. His Master’s Degree in Organization Development is from Pepperdine University, and he completed a PhD in Nursing & Healthcare Innovation at Arizona State University, studying nurse movement patterns and interaction with objects in the ICU patient room.

A Fellow of the American Institute of Architects, he is board certified by the American College of Healthcare Architects with 30 years of active practice prior to joining Texas A&M. He is only the second architect advanced to Fellowship in the American College of Critical Care Medicine. He is a founding principal emeritus of Houston’s WHR Architects (now EYP Health) with healthcare projects in 20 states and eight other countries. He has received the Lifetime Achievement Award from ACHA and the ChangeMaker Award from the Center for Health Design.

A frequent author and presenter, he is a founding co-editor of the peer-reviewed, interdisciplinary Health Environments Research & Design Journal (HERD) now in its 12th year. His most recent books include 2017’s Area Calculation Method for Health Care with co-editor Sarel Lavy; Rigor & Research-Informed Design: A Decade’s Advocacy in 2013; Design for Critical Care: An Evidence-Based Approach with co-author Mardelle Shepley in 2010; and Evidence-Based Design for Multiple Building Types with co-author David Watkins in 2009. “Design of Operating Theatres for Cardiac and Thoracic Surgery,” authored with Bill Rostenberg in 2015, appears in Alston, Myles & Ranucci’s, Cardiac Anaesthesia from Oxford University Press.