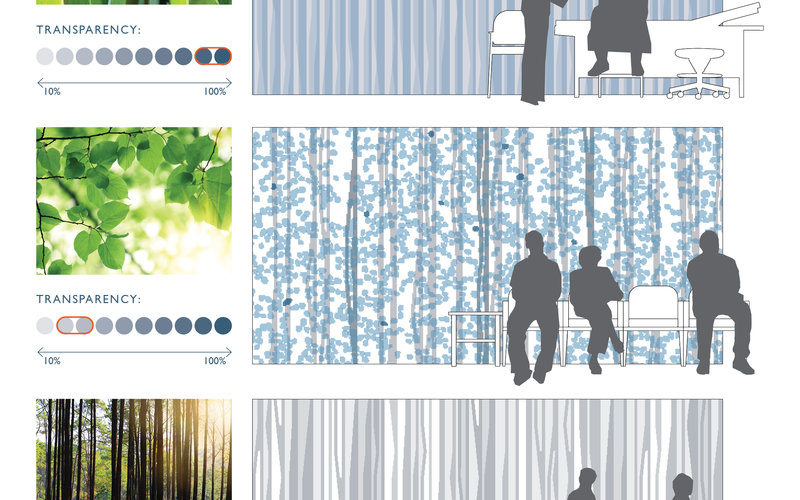 The goal of this project was to develop a line of glass that promotes dignity in care environments by providing the necessary levels of visual privacy.

Inspired by patients and families to design more dignified healthcare experiences, CAMA recognized the need to look beyond the cubicle curtain for alternative privacy screening solutions. Conversations with Skyline Design about this need in the marketplace as well as the potential use of glass due to its inherent properties and the ability to disinfect it easily, ultimately led to a partnership and the creation of a line of glass screens for use in a variety of healthcare spaces.

The greatest challenge of this project was addressing the competing needs of staff visibility and patient privacy. The resulting solution utilizes a layered approach to create the desired level of transparency that best suits the requirements of the space.

In the first phase of the project or “Deep Thinking”, many strains of research were integrated to inspire new ideas. CAMA conducted a literature review focused on patient dignity. Studies emphasized the need for patient autonomy and privacy with respect to the body, the environment, and information. Armed with this information, the research was narrowed to focus on studies addressing patient privacy and staff visibility.

CAMA also conducted an image search of architectural screening typologies and the exercise revealed a number of strategies such as slat walls, louvers and shutters, shoji screens and more. CAMA also looked to nature for inspiration collecting images of animals camouflaged within their natural environments. Both explorations greatly informed the second phase of the project, “Pattern Language”. During this phase, a catalog of organic patterning approaches was developed that would allow for controlled calibration of visibility. During the third phase, or “Synthesis”, relationships and themes from the research, patterning, and insight from Skyline Design were identified to inform glass design. A graphic tool was developed to aid in the selection process and to recommend degrees of transparency depending on the unique requirements of different healthcare spaces. In the final phase, “Prototyping”, CAMA partnered with Skyline Design to translate this vision into a glass product.

CAMA captured the research findings in a graphic matrix which identifies a number of healthcare spaces, from patient and exam rooms to public spaces such as lobbies and lounges, offering common program requirements and information about each space as well as suggested applications for the use of glass privacy screens and the recommended levels of transparency. The next step will be to test the glass products in full scale mockups.