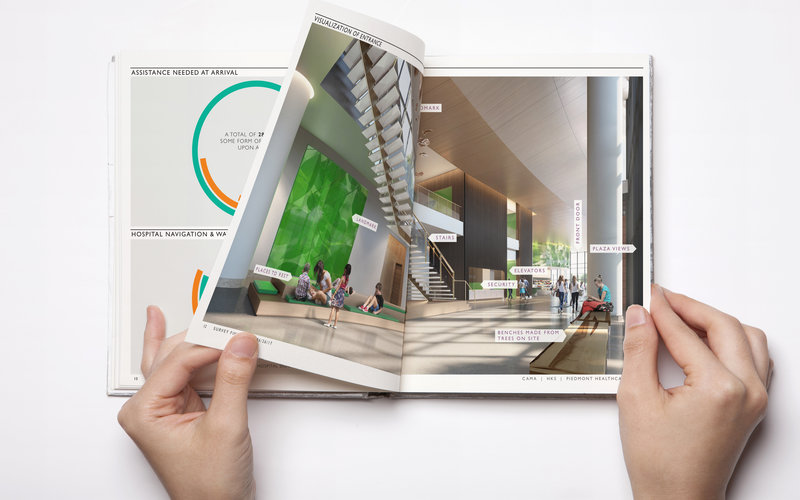 
Firm's Role on the Project:  To explore the broad collection of experiences across the continuum of care that can influence the overall impression that patients and their families have within the hospital campus.

The goal of the project was to explore the broad collection of experiences across the continuum of care that can influence the overall impression that patients and their families have within the hospital campus, from arriving onsite, entering through multiple front doors, seeking out information, navigating the building and the rest of campus, preparing for surgery, occupying time in between, recovering in the patient room, the discharge process, and finally returning home.

The project team, led by HKS Architects, comprised 122 design and construction professionals from 33 firms. Over 400 Piedmont physicians and staff participated in five weeks of experience workshops to map the future workflow of the building, six weeks of workshops to design the building, and two weeks of workshops to design the medical equipment and information technology to be included in the building. Over 500 patients and their families participated in patient advisory design workshops and completed online surveys through Piedmont’s Patient and Family Advisory Council.

Given the number of players and the speed at which the project progressed, CAMA’s biggest challenge was to devise creative ways to gather information and ideas from patients, family, and staff—and communicate them to the design team in an effective way so they could influence design solutions.


After facilitating a series of visioning workshops with the Piedmont staff and patient advisors, CAMA captured their creative design ideas in a report. The report—which included an exploration and enumeration of the driving forces behind the patient experience movement, highlighted industry best practices, and analyzed existing conditions at PAH—was updated and refined throughout the planning and design phases. The report also included several tools to aid the design team as they shaped the new hospital tower, including a set of experiential room data sheets and maps. The data sheets provided design recommendations and checklists for key locations, while the maps helped the client visually understand the relative scale and proximity of these key spaces (which, when taken together, have the biggest impact on the overall care experience).

This body of work culminated in the creation of a Patient Field Guide to introduce the new hospital tower to patients and their families. The Field Guide highlights the hospital’s many thoughtfully designed features and amenities, while also situating the building contextually within Piedmont Atlanta Hospital’s health campus and the surrounding community.


CAMA worked with Piedmont Atlanta Hospital’s marketing team to generate an electronic survey exploring how specific design features within the existing hospital influence the patient and family experience. The survey was distributed to Piedmont’s large network of patient and family advisors and received over 500 responses. Among the survey’s most interesting findings was that, for many patients and visitors (over 25% of respondents), the entrance was not clear on arrival. A total of 28% needed some form of assistance upon arrival. Only 1% reported that the existing patient guide was helpful; yet access to information was identified as the third most important to family and physicians. CAMA created a booklet with graphics summarizing the survey findings, along with annotated renderings of the new hospital tower explaining how specific design features are intended to address desirable outcomes. The booklet was distributed to the entire network of over
2,000 patient and family advisors.