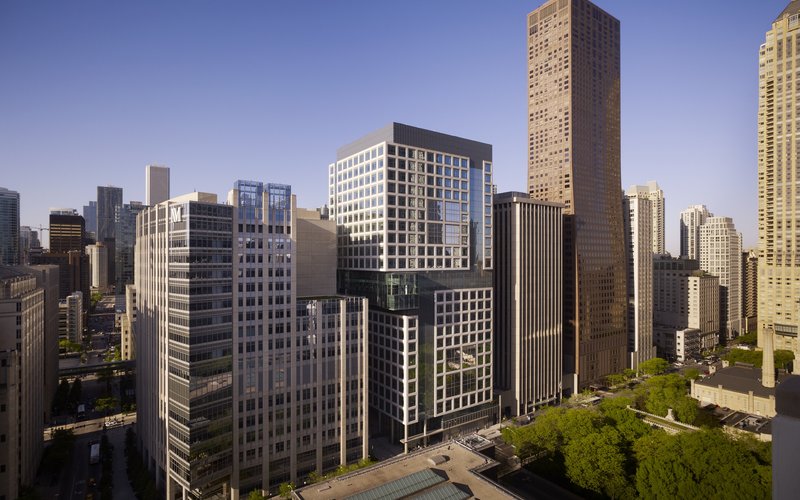 How could a second-floor ED in a limited urban space accommodate patients, families, and staff safely and efficiently?

The emergency department of the new Ann & Robert H. Lurie Children’s Hospital of Chicago was designed to make the best use of a constrained site while improving throughput and meeting patient and family needs.

In 2012, Ann & Robert H. Lurie Children’s Hospital of Chicago opened its doors to serve as a replacement hospital for the former Memorial Children’s Hospital, which had outgrown its space after more than a century of providing excellent care to the region. The original hospital’s emergency department (ED) had been bursting at the seams, causing crowding and long wait times for young patients and their families.

The hope was that the new facility’s emergency department, called the Lurie Children’s Kenneth & Anne Griffin Emergency Care Center, would be better positioned and sized to serve the community’s existing needs. However, the new hospital is located on a tiny 1.8-acre site, relative to the extensive program, right on the Northwestern University Feinberg School of Medicine campus in a busy downtown Chicago neighborhood. Space limitations meant the building had to be constructed in a stacked tower design, and every inch of every floor had to be used to its fullest potential.

Complicating matters were the local zoning restrictions for the neighborhood, prohibiting loading and unloading on the adjacent streets. Some of the facility’s square footage on the ground floor had to be used for ambulance docks to serve the system’s seven ambulances, as well as to accommodate patient and staff drop-off lanes and loading docks for the pick-up and delivery of supplies.​

“By the time we added in all of the patient drop-off/pick-up lanes, loading and ambulance docks, and multiple entry and lobby spaces, there was no space left to place the ED on the first floor,” explains Sue Ann Barton, AIA, LEED AP, EDAC, a principal at ZGF Architects (one of three firms involved in the project).

After much study, the decision was made to locate the ED on the second floor of the hospital building. In-depth planning was required from the very beginning to create a design that would ensure the utmost efficiency and safety for this second-floor ED.

There were a number of challenges to address throughout the ED planning process, Barton says. One of the biggest issues was determining how best to enable patient access to the second floor.

“We considered creating a vehicle ramp to the second floor for ambulances, but that took space from the ED. It also meant that if we had a mass casualty with multiple ambulances going up and down, they would have to go one at a time,” she says. To determine the safest and most efficient way to access the second floor ED, the health system hired a consultant to conduct time and motion studies. The findings revealed that patients could be delivered from arrival to the ambulance dock to the ED itself in a significantly shorter amount of time than the ramp alternative.

“Ambulances can drive into the dock and unload directly into a large, dedicated trauma elevator that goes right into the ED. This was deemed the most effective way to do it,” Barton says. The elevator has an override to prevent it from going anywhere other than the ED, and also to the heliport if needed. There are also two patient elevators on the first floor, one on each side of the lobby, to accommodate walk-in patients.

Another challenge was the danger of the elevators breaking down and causing delays in patient care. To minimize this risk, there are many redundancies planned into the system to accommodate a range of scenarios. Barton points out that, for peace of mind, security is also placed at the ambulance dock, along with cameras that allow staff to see directly from the ED and the surgery floor when an ambulance arrives.

The new design has improved ED throughput, allowing the department to handle the 60,000+ pediatric visits a year more efficiently. In fact, everything runs so smoothly that Barton says the staff often reports that they forget they aren’t on the first floor. Part of the success is thanks to the strategic layout of the department.

“We designed the main ED in a series of three contiguous pods of 10, for a total of 30 beds that flow together. This allows the ED to expand and contract throughout the day and night as needed,” she says.


“All of the rooms are same-handed, and provide flexibility for a variety of patient acuities,” she adds. “The most acute cases are put into the pod closest to the procedure rooms and trauma bays. There are also X-ray imaging rooms embedded in the core.”
Barton also points out that there is a fourth, slightly removed pod of 10 rooms in the ED. These were initially used for urgent care, but this area was recently changed to serve as an observation unit to accommodate patients who need to be monitored but don’t require admission. These patients can be released directly from this fourth unit.
Key Findings

Another design strategy was to have people enter and exit through different doors to separate arriving and discharge patients. There is 100% fresh air throughout the ED, and all of the exam rooms are generously sized to allow space for families to stay with their young patients. Furthermore, many of the rooms have windows to allow natural light into the space, creating a brighter and more comfortable environment. The second-floor location also means that the windows look right out over the trees, providing an important connection to the world outside the hospital.


Today, both patients and staff at Ann & Robert H. Lurie Children’s Hospital report greater satisfaction with the new, improved space. And while this is not the only second-floor ED in the United States, Barton believes it is the only one that relies on an elevator to transport ambulance patients instead of a vehicle ramp—at least for the time being.

“The unique design of this second-floor ED could be an important model that other high-density urban settings and places with a high risk of flooding might want to follow,” she says.

Barton adds that this creative ED configuration, along with its state-of-the-art features, has helped position the health system to continue to grow along with its patients.